skip to main | skip to sidebar

Time really escapes you when you're traveling 2 hours each way to see your precious little boy! It is still very surreal to think that I'm a mommy! My boy is here! We are feeling very blessed this holiday season. 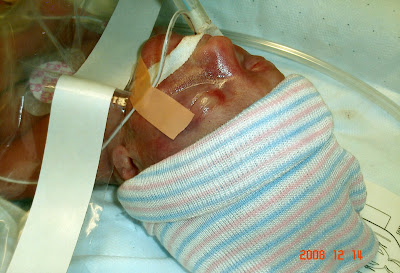 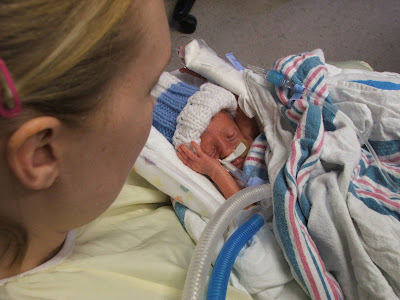 12/15 - There was already talk of taking him off the ventilator, he was doing great. I got to hold him for the first time. We both really needed it! He looked so content and precious in my arms! However, the preemie life is a roller coaster of it's own and he started breathing over the ventilator. They decided he needed to go onto the oscillator ventilator. The oscillator provides him with the oxygen but with less pressure. Unfortunately the oscillator shakes him and they have to sedate him while on it so it doesn't aggravate him.
12/16 - Still on oscillator but he was still fighting it and breathing over it. When he does this he uses too much oxygen and energy, they say it's like us trying to run a marathon. They had to sedate him more. X-ray reveals that the valve near his lungs that circulates blood through the lungs while in utero didn't close completely. If this valve doesn't close, blood could fill the lungs and cause them to collapse. They gave him meds to hopefully close up that valve. the x-ray later that night shows that the meds are working and the valve is already starting to close. 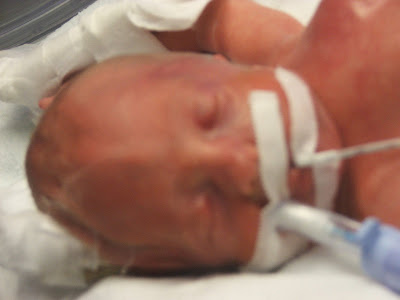 12/17 - Aidan was doing well on the oscillator so they are keeping him on it. Basically it does the work so that his lungs can mature without him having to do all the work. They are thinking he only needs to be on this 2 more days. His nurse thought it was a good day for him to do some arts & crafts and made a cast mold of his feet for the NICU Christmas tree. She also made us a pair and put them in a sea shell. They are so tiny and sweet!
12/18 - We arrived at the NICU around 1:30 in the afternoon and he was already back on the conventional ventilator!!! We were so excited! He had been under 3 billy lights to help with the bruising he had from delivery. As the bruising from delivery breaks up it causes jaundice, so the he's been under UV lights since birth. His skin is already looking so much better and the bruise on his chest is a lot less noticeable. They are thinking he'll only be on the conventional ventilator for a couple days, it's on the lowest setting and he's still breathing over it. 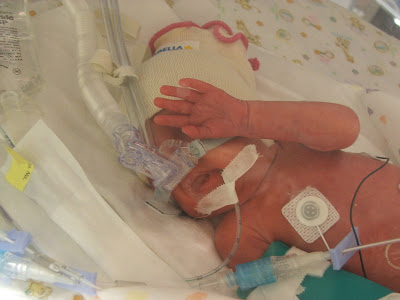 12/19 - Aidan scared Grammy today. While I was with the social worker Aidan decided to open his eyes, but he rolled them back. I guess it's not uncommon but Grammy didn't like it! Then the nurse suctioned out his nose and mouth and there was a bunch of phlegm, it got Grammy and the nurse gagging. It didn't bother Aidan at all, and I thought it was pretty funny! His ventilator was turned down to only 20 breaths a minute where as the oscillator was 100 breaths a minute.
12/20 - They took him off the ventilator, really hoping he's ready for it! He's on the c-pap which is a little cap over his nose that provides extra oxygen. They started him on breast milk that I've been pumping. He's tolerating it really well and seems to like it.
12/21 - Aidan did good all day. He's such a big boy! However, he loves to give his daddy a hard time and it seems like every time Chris goes up to the incubator monitors go off. They're usually only reminder ones but they make Chris so nervous. I got to help change him and feed him. Well hold the syringe that hold the breast milk! We stayed at the Ronald McDonald house and we have never met so many nice people. They are so sweet. It was the Christmas party night and every child at the house, or family was at the house got a $100 gift certificate to Toys R Us, including Aidan. The family that donated the gift certificates were so nice! There was also a family that has been volunteering for 26 years at the house. They provided us with a traditional Greek dinner that was absolutely delicious. We met a girl with twins in another Baltimore NICU and it was so nice to have someone to relate to! 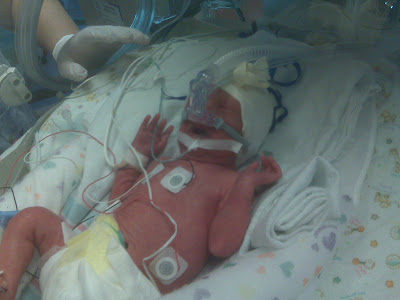 12/22 - Aidan had 2 de-stats over night and they were talking about putting him back on the ventilator. It's really hard not to think that it's not a step backwards but they said it's very common for them to go back and forth. They tested his blood gasses and they came back normal, he got to stay on the the c-pap. We are so proud of our tough guy! And he pooped today! hehe. But pooping is great, means he's digesting my breast milk and all his digestive organs are working.
12/23 & 12/24 - We stayed home these 2 days to take care of house hold stuff. I missed him like crazy! I called a couple times yesterday and once this morning and they said he's being a perfect gentleman! He's only had one tiny dip in his oxygen, went down to only 83 which is not bad at all and then came right back. He's such a good boy and doing so well!
And that's the run down. We're planning on getting up tomorrow and exchanging Christmas gifts and then heading up to see our boy. We're staying through the weekend and staying at the Ronald McDonald House again. I'll be sure to update you on his status and how the boy is growing sometime this weekend.
I hope everyone has a wonderful Christmas, I know we will! We are truly blessed!
at 3:41 PM

Merry Christmas, guys! Thank you so much for taking the time to post the update. I have been thinking about you all and wondering how things are going. So happy your angel has arrived in time for Christmas! Love and hugs,

yay! I am glad to hear he is doing soo well! He looks so great and so cute! I have been thinking about you tons sweetie!

cjsayers77
First and foremost I am a mom! I proud mom to a 27 week preemie who is now a wonderful toddler. I have 2 blogs, one for our life and one for my writing. Enjoy!