skip to main | skip to sidebar

Flexi -what?
I read this term yesterday and it fits. Flexitarian is someone that's not quite vegetarian but really cutting back on meat. I've wanted to cut back for a while but was too lazy. But recently I've made the move and it's been made easier because I've been getting sick after eating red meat and I've been having really bad heartburn lately. So I'm cutting out red meat. I'm starting out slow by learning 1 meatless recipe a week until I have a good few learned that we really like.
My first attempt was eggplant lasagna. This is not an easy weekly meal and we liked it ok.
But last night I made beans and rice enchiladas! They were easy and yummy! If you want the recipe, here you go: http://recipes.sparkpeople.com/recipe-detail.asp?recipe=194603 Warning, they are VERY filling. These were small restaurant style tortillas and I ended up only eating one enchilada and about 1/2 of the rice. I'm hoping they freeze well because that's where the leftovers went!
And here's my plate before I devoured it! (Oh - the rice was the left over that I had cooked that didn't fit in the enchiladas. I mixed in a pot with shredded cheddar and globbed some salsa in it. It was pretty tasty.) 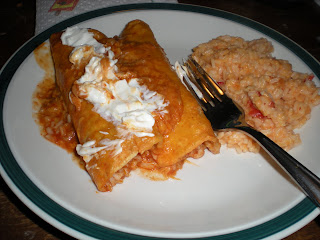 Best of all, Chris liked them a lot. I'm always nervous when I experiment with food but this was a hit! Tonight I'm making quinoa and ground turkey stuffed green peppers. Not meatless but still a lot healthier then that fatty ground beef!
at 1:41 PM

cjsayers77
First and foremost I am a mom! I proud mom to a 27 week preemie who is now a wonderful toddler. I have 2 blogs, one for our life and one for my writing. Enjoy!